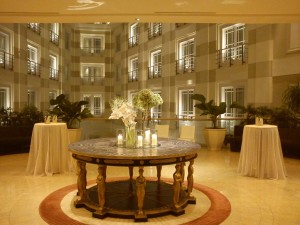 Fullerton hotel had a promotion over the chinese new year period which was too good to miss. So I brought my missus and we had a 1 day staycation at the Fullerton hotel over a weekend in January 2011. Lets begin with the package, Price was $288 before tax for one night stay in the courtyard room together with 2 tickets for a river boat ride at the Singapore river and $88 dining credits at any of the restaurants at the hotel. Given Fullerton hotel’s reputation as a six star hotel in Singapore, the deal is almost too good to be true.

Since I’m providing a review of the hotel, I’ll categorise my review in order to be as clear and objective as possible.

1) Check in/ Check out and services

Checking in and out was a breeze. The staff are mostly efficient and friendly and checking in and out barely took 5 minutes each. What impressed me further was that on checking out, there were initially only 2 service staff at the counter. But when a quene of 3 people formed behing us, within a min or so, 3 other service staff came out of nowhere to offer assistance, well done on this part. In general, the staff at Fullerton speaks good English and are professional and friendly. But I that they lack a little personal touch. Good service but just doesn’t make me feel that it touches me. 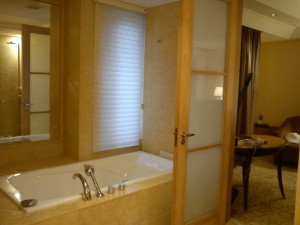 Large bathtub in a huge bathroom

Although my package stated courtyard room, I suspect I was given a postmaster room given that my room faced the skyscaper. I’ve no complains about this since I’m very sensitive to nose and music or noise from the lobby was a worry of mine before i checked in. The room itself was pretty small with just enough walking space for one around the bed. However the toilets were huge. In fact, they were almost as big as the room itself.

The good things about the room is a nice and comforatble bed with decently good sheets with it. A decent size work desk with good lights if you plan to do your work. A larger than normal bathtub with very good flow of water from the filling tap so that I didn’t have to wait long to have my bath. A seperate shower cubicle with rain shower and seperate cubicle for toilet bowl mades the toilet almost suite standard. 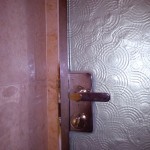 The Cons about the room? The bath towels are large but noticibly thinner than what I would expect of a 6 star hotel. The toilet seats are light and likely made of plastic. The shower door area is a little worn (see photo) and some touch up would be good.

I didn’t get to use the pool as it was raining thoughout my stay. The hotel has a heritage center that is worth a visit. In general, the hotel itself is a beauty particularly for people like me who love dated buildings and just walking in the hotel building makes me happy. The rooms were equipped with free wi-fi which had good coverage and was in fact faster that my own home wifi. 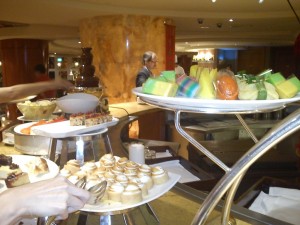 I dine at the town restaurant for dinner and breakfast. Dinner was at $68++ for seafood buffet. The main attraction of dinner was the grilled lobster which was huge and fresh. Unlike some other buffets, the lobster was contantly replenished every 5 mins till the end of the dinner. My only complain was that the lobster was a tad cold despite coming out in frequent batches. The variety of food at dinner was merely decent, but all the food was of good quality. The oysters were fresh, the salmon was great and sashimi was juicy. Overall, I would rate the dinner as slightly above average.

Breakfast however was fantastic. The tea was of good quality and all sections of the buffet was open for breakfast, including the Japanese section. There were so much food to choose from that I could barely have lunch after the breakfast. I particularly liked the fact that the orange juice had pulps in them instead of giving out ornage cordial like many other places.

All in all, the stay at Fullerton hotel was an enjoyable one. While rated as a 6 star hotel by many people, the amenities are mostly of 5 star standard only. But the hotel makes this up with fantastic ambience and good service at a decent price. I would definitely stay at the hotel again.

Find the best deal, compare prices, and read what other travelers have to say about Fullerton Hotel Singapore

Be informed of the latest promotion via email